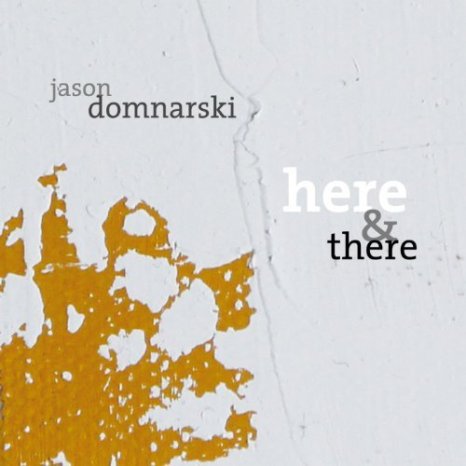 Last time, I reviewed Anouar Brahem’s Le Voyage de Sahar, one of my so-called desert-island records; an album I`ve owned for two years and probably listened to more than fifty times. This week I have decided to take a different route and review a record that has come into my possession just a few days ago. I’ve listened to it four times so far and now I have the privilege of writing about it. Without further ado I present Jason Domnarski’s Here And There.

Released June 25th 2012 this is Domnarski’s third “full” studio album and fourth overall (his 2010 release Vices “only” contained four tracks, though many would agree it delivered more MUSIC than most 12-track records available on the market today). While Vices pretty much felt like a continuation of his excellent Inventing The Wheel, his most recent record, though equally good, could not be more different from that sound. Here And There is the most conservative album Domnarski has released so far. The sound is, for the first time, that of a pure piano-jazz.  If you’ve ever listened to Domnarski’s music  before (and if you havn’t what are you waiting for?) this young pianist is far more concerned with melody than he is with being embraced by the traditional piano-jazz “crowd”.

At the risk of never becoming Manfred Eicher’s favorite pianist, Domnarski offered compositions that were always on the experimental side though never losing touch with the intrinsic musicality his instrument has to offer. As he proved from the get-go  Domarski has an excellent ear for melody (just like Tom Waits always rightfully claimed to have when it comes to playing the piano)  and, more importantly, he is not afraid to experiment with his sound. His other albums differ sensibly from each other (again, Inventing The Wheel and Vices come as a package) each with its own distinctive character, each telling a completely different story, a feat most admirable for such a young musician.

Well, after proving that he is more than capable of carving out his own niche, and that he is not afraid to start from scratch and offer something completely new, Domnarski now makes a 180 and proves that, if he so desires, he too can be “old-school”.

Here And There is a very traditional work when it comes to piano-jazz, with an almost late-night jazz-club feel that leaves the impression that Domnarski is attempting to prove himself on brand-new terrain. Also, one can’t help but notice that this is his first record not released under the name “The Jason Domnarski Trio”. This gives the impression that it’s a deeply personal project for the pianist, that he is fighting his own battle in the Jazz-arena in front of a crowd of purists.

Paradoxically, this is also the album with the most evenly divided “screen time” between the instruments as his band, this time comprised of John Davis on bass and David Burnett on drums, seems more prominent throughout the tracks than on Notes and Wheel. And, as if to prove the validity of the previous statement, the record starts with Pyramid Scheme which immediately begins creating the balance that will be kept throughout the album.

Though Jason Domnarski is an American musician, and though his record was recorded in Brooklyn NY of all places, starting with track number two (namely Five Day Forecast) one can clearly hear the European influence as one’s mind wanders to the sound of Marcin Wasilewski  (see Night Train To You), Manu Katche (Burnett’s drums) and, at times, Nik Bärtsch and even Eric Satie (especially on the third track, the hauntingly beautiful Streamlines).  With the fourth track, Ampersand   he starts to sound like the Jason Domnarski of old (and by old I mean tracks like Newyorkistan off his first album) reminding the listener that whether experimental or classic he has never lost touch with the core of his sound which, in essence, remains the same.

The most toned-down track on the entire album is the aptly titled Evening Man,  a slow-tempo piece  that serves to reiterate that this is a record of heritage, as the pianist pays homage to the genre he identifies with the most (and please note that this is the first time I have not used quotation marks for the word genre). The more than capable Burnett and Davis provide the perfect accompaniment to offer the entire record a cohesive nature, a sense of structure akin to that of Brahem’s Sahar which I talked about last time.  The album continues in Wasilewski/Bärtsch mode with Kensington and Faux Amis. As it progresses the listener gets to notice that while some tunes, such as Kensington and Streamlines stick with you more easily, Domnarski has abandoned the “earworm” (ever-present in the first albums) for songs that are more mature, only ripe for picking after having experienced them a few times.  Domarski chooses to close with Sepia Tone, in a way the most “pop-sounding”, easy-to-take-in of all the songs, a wise decision as that is the kind of tune you want to be going out with if you’re looking to reel in the audience.

For the first-time listener, Here And There presents one of the most promising jazz pianists of the moment on his first venture into the fertile lands of classic jazz. For those familiar with his work, Jason Domnarski shows, by abandoning the experimental for the traditional, that no style is foreign to him, that no task is too complicated and, most importantly, that his focus is on the quality of the music he produces.

I’ve mentioned my valued “desert island” collection and how important it is to me and, every time I listen to an album like this it just goes to show the dynamic nature of that “list”. With Here And There now fresh on my mind my heart fills with joy at the prospect of all the wonderful records that I`ll keep adding to it in time.

Watch out for: Jason Domnarski redefining his music in his future records