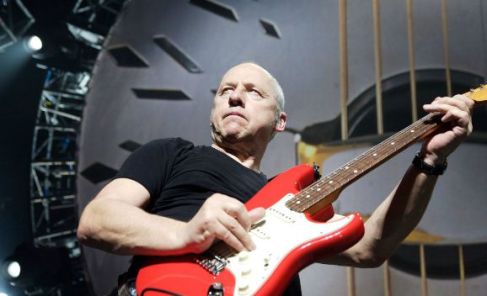 Let me get state this right off the bat: I’ve made no secret in the past that this is a highly subjective blog. I am in no way an authority on music; I’m just passionate about this art form when it’s done right.

“The Music and Myth” is not merely a review blog; it’s more of a place where I try to promote the music I love and where I write about my experience with a certain piece of music, musician or performance.  You’re not going to get hateful reviews of how much a certain Avril Lavigne record sucked because I just don’t take the time to write about poor quality music

The records and artists I do write about are some that I already love and have a great opinion of much to the dismay of people who would like to read cynical and mock-intellectual reviews that try to put down certain artists and records. That’s just not me. When it comes to music, if I can’t say something good about it then I’d rather not write about it at all (though I’m sure a blog full of hate and poison would get ten times more views).

Anyway, the reason I’m starting my article with this little disclaimer is the fact that this weekend I got to see Mark Knopfler live in Budapest at the Laszlo Papp arena as part of his Privateering tour. If you know me at all you will know that I’ve been a huge fan of Mark’s for fifteen years and that getting to see him in concert was always on my “bucket list” so I’m not the right guy to make a subjective comment about the quality and structure of the concert. Hell, he could have spent two hours playing Bulgarian folk songs and I would still have gone home happy such is my love and admiration for this man. Still, I’ll try to keep this review as objective and professional as I possibly can.

When it comes to Mark I’m a fan of everything he did, from his Dire Straits era (both the “Sultans of Swing” and the “Brothers in Arms” incarnation of DS) to his solo work. I’m definitely not one of the people who expect to see a new Dire Straits record out any time soon only to be left disappointed and in the past I’ve likened those people to the unfortunate souls who think disco is coming back or that Elvis is still alive. In fact, I’m very fond of Mark’s solo work and, on my review of Privateering, I wrote that the record “again goes to prove that while Mark’s biggest hits came in his Dire Straits-past his best music and most interesting stories belong to the present.” It is with this mindset that I’ve attended the concert and it’s because of this mindset that I’ve enjoyed it so much. In fact, for a tour designed to promote the record the concert had a little bit of everything.

I was a bit surprised by the fact that there was no opening act and when, all of a sudden, Mark and the gang appeared on stage I was completely caught off guard. The aforementioned “gang” consisted of Richard Bennett (guitar), Guy Fletcher (keyboards), Jim Cox (piano, organ, accordion), Michael McGoldrick (whistles, uilleann pipes), John McCusker (violin, cittern), Glenn Worf (bass), and Ian Thomas (drums) – who made an excellent impresson on me. 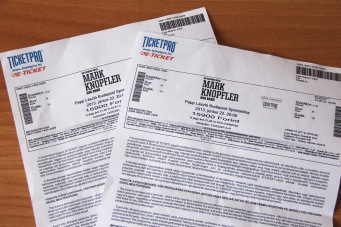 They went right to work starting the set with “What It Is”, Mark’s undisputable anthem of the post-Dire-Straits-era and a perfect song to get the crowd in the mood. They continued with “Corned Beef City”, one of only three songs they played from the new record (the others were “Privateering” and “I Used to Could”). I was surprised that they only played three of the generous twenty tracks from Privateering but I have to say I was also happy about that in a way. Since it’s my first time seeing Mark live I was glad that the selection of songs he played was more varied. Now, regarding “Corned Beef City” and “I Used to Could” I went on record saying that I’m not necessarily a big fan of his blues-influenced tracks (which abound on the new album) but I have to admit that they make for some great live performances. As far as “Privateering” is concerned, I think it’s one of the best songs of his solo career and it sounds just as good live as it does on CD.

I was happy that we got to hear “Song for Sonny Liston” which I love and especially “I Dug up a Diamond”, a song that has a very special meaning to my wife and me for reasons that have everything to do with our wedding and the wedding DVD. Since he doesn’t always play these two songs on the Privateering tour I think we were most fortunate to get to enjoy them live (and in case you were wondering, they were awesome!)

The combination of “Father and Son” and “Hill Farmer’s Blues” was very emotional and a feel-good moment for band interaction as was “Postcards from Paraguay” while “Speedway at Nazareth” was absolutely intense. I’ve always stated that Mark’s greatest value as a guitarist is in the fact that he never gave into the temptation of putting the instrument before the song, a common fault of many of the world’s greatest guitarists. One of the most celebrated and innovative guitar-players in the world Mark has always been wise enough to never feature his instrument beyond what a certain song calls for, making him a storyteller first and a guitarist second, a most fortunate quality in a songwriter. “Speedway” is a song in which you get to witness Mark in full guitar-god mode while never taking away from the story of the song which is a rare and precious occurrence in music.

The Dire Straits nostalgia moments were provided by “Romeo and Juliet” and “Telegraph Road”, the latter being the set’s closing track, an excellent choice. If I’ve managed to maintain a degree of objectivity and professionalism so far it all flies out the window now that I write about “Telegraph Road”. The song is not only one of my favorite MK/DS tunes but one of my absolute favorite songs of all time and I’ve been in love with this track for fifteen years with a love that never once waned. To experience it live was as though I got to relive the last fifteen years of my life in ten minutes, with all its incredible ups and abysmal downs, an emotional roller-coaster ride that I cannot compare with any other musical experience I’ve lived so far and one that I think represents the pinnacle of what music can achieve.

After leaving the stage and leaving behind a roaring crowd the band quickly returned for an encore consisting of “Our Shangri-La” and “So Far Away”. I’ve heard someone complain that it wasn’t “Sultans of Swing” or “Brothers in Arms” but, as a person who tries to understand the structure and mindset behind performing music, I can understand the decision. While I would have also liked to have heard those classics I am not at all disappointed with the encore that featured two powerful and very sentimental tracks.

In its entirety, the concert was a display of perfect professionalism from one of the music industry’s few veritable gentlemen. Musically, it was irreproachable and my only disappointment was the structure of the stage, namely the lack of a screen. We had great seats but, even so, it would have been nice to have a screen showing close-ups of the band performing. I’m not sure who is responsible for this aspect of the performance, whether it was the guys at the Laszlo Papp Arena or Mark’s own staff but that’s one thing that I would have liked to have seen. Still, only a minor gripe in what was otherwise an incredibly positive experience.

There is something to be said about experiencing excellent musicians live and when it is someone whose work you’ve been listening to and who you’ve been looking up to for a decade and a half the experience is incomparable. As a citizen of a country that has only recently gained a more dynamic mindset when it comes to seeing their favorite performers live I’m a bit sad that I haven’t attended more such concerts in my life and I’ve made it a point to see Mark perform any chance I get. It is most certainly worth it!