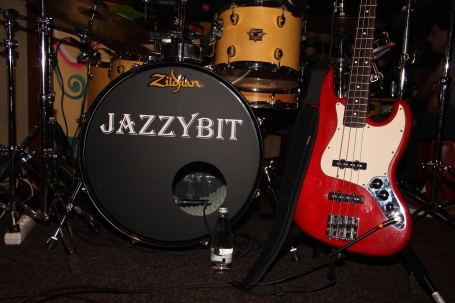 With the beginning of October autumn was shaping up to be a very musical season. There is, of course, the highly anticipated Al DiMeola concert coming up in November, Iva Bittova played the synagogue as part of the SoundCzech festival, the Simultan Festival (that I sadly didn’t get to attend) brought some good quality music among the many other art forms it aimed to promote, and the well-advertised Timisoara Baroque Festival featured more concerts than you can shake a conductor’s baton at (more on one of these concerts in a future article). Meanwhile, on the local Jazz-scene a young trio that has been growing in popularity for the last year and a half announced that they will be playing their last gig in town for this year before retiring to the studio to record their debut album.

When I had heard a few weeks ago, that JazzyBit was going to be performing at the launching party of my latest writing project, a Romanian comic book series called Fairytale Therapy, I was very happy and excited but also a bit embarrassed. Pianist Teo Pop and I had worked together in tech support at my old job (albeit in different departments) and, though I’ve been aware for a while that he’s in a Jazz trio and though I like to call myself a “Jazz journalist”, I had never seen him in action.

Things always turned out in such a way that we were never in the same place at the same time, even though the very young band already has some pretty impressive gigs under their belt (including the Jazz festival in Gărâna, arguably the biggest event of its kind this side of Europe). Well, at least I was going to hear them at the book-launching event so I was happy about that. The party turned out great but I had little time to focus on the music, being pressed by the responsibilities that plague the debuting comic-book writer:  drinking wine, mingling with friends and signing autographs, stuff like that…but I digress. Anyway, I had heard enough to know that I like their sound so when I got a Facebook-notification warning me that this would be their last gig in a while I knew it was now or never.

The show was held in a place called Rost, a quirky but rather narrow newly-opened bar in the center of the city. What the place lacks in acoustics it makes up for in ambiance since no matter where you are seated you will be close to the musicians. That always helps one get into the “vibe” of a show even if one forgot to make reservations ahead of time and got stuck with the worst vantage point in the room (I already apologize for the bad pictures). Anyway, once the guys started playing you didn’t care where you found yourself because they plain and simply rocked the house.

The trio, consisting of my work-buddy Teo Pop on everything with a keyboard, Mihai Moldoveanu on bass and Szabo Csongor-Zsolt on drums (who looks young enough to be my son but plays with the self-confidence of Lewis freakin’ Nash) was founded in 2011 and started performing together at the beginning of 2012. Though only playing together for rather short time JazzyBit have the chemistry of a band with a lot more years under its belt and on stage that translates into high energy and great fun.  I’ve never made a secret of the fact that this is a very subjective website, more of a musical diary than a review-blog, so I have to start off by saying that I’m not really into Latin-Jazz nor am I a big fan of synthesizer in a Jazz trio (I always prefer the piano) but in spite of that I was instantly captured by the performance.

Throughout the hour and a half of their performance there was never a dull moment and I was impressed with the great talent of these young musicians whose charismatic and high-octane delivery kept them safe from ever falling into a generic sound. Teo Pop is incredibly fast and very versatile and his interactions with Szabo Csongor-Zsolt, including the round of back-and-forth one-upmanship – always a crowd pleaser at a Jazz show – provided the spice for the performance while Mihai Moldoveanu’s bass was a powerful backbone.

The band played their own compositions, most of which will probably be found on their debut record Touch the Sky. The songs, with a predominant Latin-Jazz influence, also contained elements of funk, blues, straight-up piano trio and even a bit of rock at one point. My favorite pieces have to be “Curacao” (seen here as performed at the Budapest Jazz Club) and “Poate de ce” (“Maybe Why”) for its low-key delivery that reminded me of another pianist whose music I greatly enjoy.

While the band still seems to be working on carving out a more well-defined identity for their sound (a process that is completely understandable at this point in their careers and will no doubt be finalized by the time they finish recording their album) the interaction between the musicians is really good. All in all, JazzyBit is a hot act right now, worth seeing at this point primarily for its “bang-for-your-buck” delivery. You have a fresh and energetic band that plays like a veteran act and the best time to catch them live is right now. I predict a massive growth in demand and popularity sooner rather than later and, at this point in their career, you can still catch them is small, intimate venues. If before getting to see them live I was interested in their debut record only from what I had seen on Youtube, after their show this Saturday I am counting the days until “Touch the Sky” hits the shelves!