In my previous article I talked about working on my novel and the way in which music influences my writing. I use music to calm me down when I get restless (after hours of sitting in front of my PC) and I use it to invigorate me when I get tired. I also use it to help me mobilize my thoughts and let my imagination flow. On the backdrop of certain songs I shape scenes and characters and give them life.

My first novel (which for the time being is resting comfortably on my shelf) featured a character named Alan Waits. I used a line from Tom Waits’ “Sins of my Father” as an opening quote for a chapter in my second novel (which will definitely not lay forgotten on a shelf).

The main character from my second novel is a strong, intelligent and independent woman. As a male writer it was very important to me to shape her into a complex, multifaceted leading lady. Again, music was an inspiration. Thankfully, I have so many outstanding, smart and talented musicians from which to draw inspiration. Though the pop music scene seems bent on objectifying women and downplaying their talent while emphasizing what it perceives as beauty, the quality music scene fortunately abounds with strong female musicians who command respect through their artistic accomplishments. 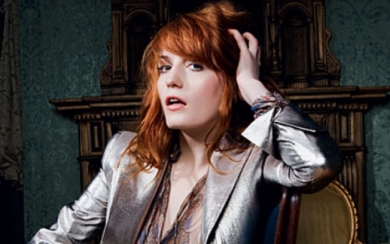 I was first introduced to Florence + The Machine by my wife, who is a great admirer of the charming and charismatic Florence Welch. Though at times the young British musician seems to only be teetering on the precipice of the quality-music scene (and I always fear her next step will take her plummeting into the side of pop that is easy on the eyes but difficult on the ears – this video feels like a bad omen) for now she has still managed to maintain her position through her amazing talent, which she expresses in her wonderful compositions, her powerful voice, her relentless energy and intense stage presence.

I first got acquainted to her through an awesome performance of “What The Water Gave Me” on Later… with Jools Holland. I was absolutely mesmerized. After listening to her first two records it’s clear that Florence Welch is a very serious musician swimming in not-always-serious waters. However, she has so far managed to stay afloat and produce two of the most fresh-sounding records of the last few years. What worries me is that, in spite of the irrefutable value of her own work, she has sometimes shown preference for music of dubious quality and has often exhibited a great admiration for exactly the aspects of pop music that her work itself seems to oppose (and successfully, I might add). With her third record in production, I sincerely hope she will continue on the same road. As long as she does she will remain one of (if not the) most original, credible and powerful female composers and vocalists on the present pop music scene. 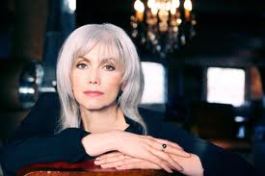 She is the leading lady of country music. A distinguished and delicate musician who has been a constant presence in the country scene for over four decades, Harris exudes the grace and style of a true artist. I first discovered her work in 2006 when she teamed up with former Dire Straits front man Mark Knopfler (whom I’ve been worshiping since my teens) to produce a stellar record called All The Roadrunning. Her gentle voice and graceful personality were the perfect fit for Mark’s low-toned vocals and laid-back demeanor. Here is a song called “I Dug up a Diamond” which my wife and I loved so much we had it featured on our wedding video.

Also, their duet “If This is Goodbye” has been featured in an article I wrote called Secrets of Sadness: Four songs that will make you completely lose your shit. I believe it needs no further explanation. Ever since then, whenever I listen to country music it is most often either Johnny Cash or Emmylou Harris which I also believe needs no further comment. 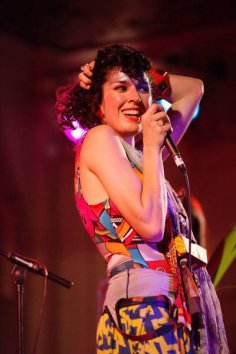 Cibelle is another musician I wrote about before, when she absolutely rocked a rather difficult Tom Waits tune. I checked out her solo work when I came across this remake of Gilberto Gil’s “Punk da Periferia”.

This is quite possibly my favorite video on the internet. Everything about this performance is top-notch, from the way they’ve altered the original tune making it funny and bad-ass at the same time, to the cellist who looks like Helena Bonham-Carter and uses her instrument to make scratching noises like she’s Jam Master Jane, to the Ric-Flair-tastic cape on the drummer and the way the entire band just stops playing at one point to join in on the finger-snapping. Then, of course, there’s Cibelle herself. Everything about her is perfect in this performance: her voice, her dress, her facial expressions (which make up half the song’s “attitude”), the way in which she just casually fumbles around with the instruments looking disinterested and how she alters the sound-effects with her foot. Absolutely brilliant! There are other great Cibelle tunes out there (some of them remind me of Xela Zaid – shout out my man!) and they’re usually great but “Punk da Periferia” is perfect in every way and I must have listened to it hundreds of times. Cibelle is a strong musician with a bright future and a great understanding of the importance of performing.

Let’s get this out of the way first: when John Zorn asks you to be in one of his projects (alongside the likes of John Medeski, Mike Patton and freakin’ Marc Ribot) it already means you’re a pretty big deal on the music scene. I first discovered Sofia in a video from Zorn@60’s Warsaw concert playing “Besos de Sangre”.

Initially I had checked out the video because it said John Zorn and I also saw the name Marc Ribot (which always means my Jazz-senses are tingling) but I quickly forgot that Zorn and Ribot were even there as my jaw dropped at the incredible performance of this young New York musician. In fact, why the hell am I even wasting your time here: go ahead and listen to the whole concert which is fantastic! I looked for some more of Rei’s work and stumbled across this little gem which would have made the old woman proud.

Whether she is playing with Zorn, performing classics with the Pan American Symphony or singing her own exquisite compositions this lady has a fantastic way of conveying emotion.

She is the Meryl Streep of musicians. Like the distinguished actress, Patricia Barber exudes intelligence and magnetism. Long-time readers of The Music and Myth will remember that Smash was chosen the Best Vocal Record of 2013. Her songs are veritable lectures in writing and composition and her stage presence conveys vitality and prestige. She is the standard-bearer for female musicians and Smash is her magnum opus. There is really not much I can say about Patricia Barber without falling into an elated discourse of celebration. Her music is smooth, well-timed, her voice is noble and refined and her lyrics are brilliant. As a writer, I feel she is a kindred spirit, and she herself seems to agree. In this interview, which preceded her latest record, she says: “I am a fiction writer.”

Florence Welch, Emmylou Harris, Cibelle, Sofia Rei and Patricia Barber are The Music and Myth’s favorite female vocalists. In an industry whose landscape is vast and constantly changing, it is hard to speak of the absolute best. These five musicians, however, manage to transcend the limits of the very music they perform. They embody their musicianship in a way that makes them indistinguishable from their art and that is an exceptionally rare occurrence. They are deserving of the highest accolades and their work comes highly recommended by The Music and Myth.