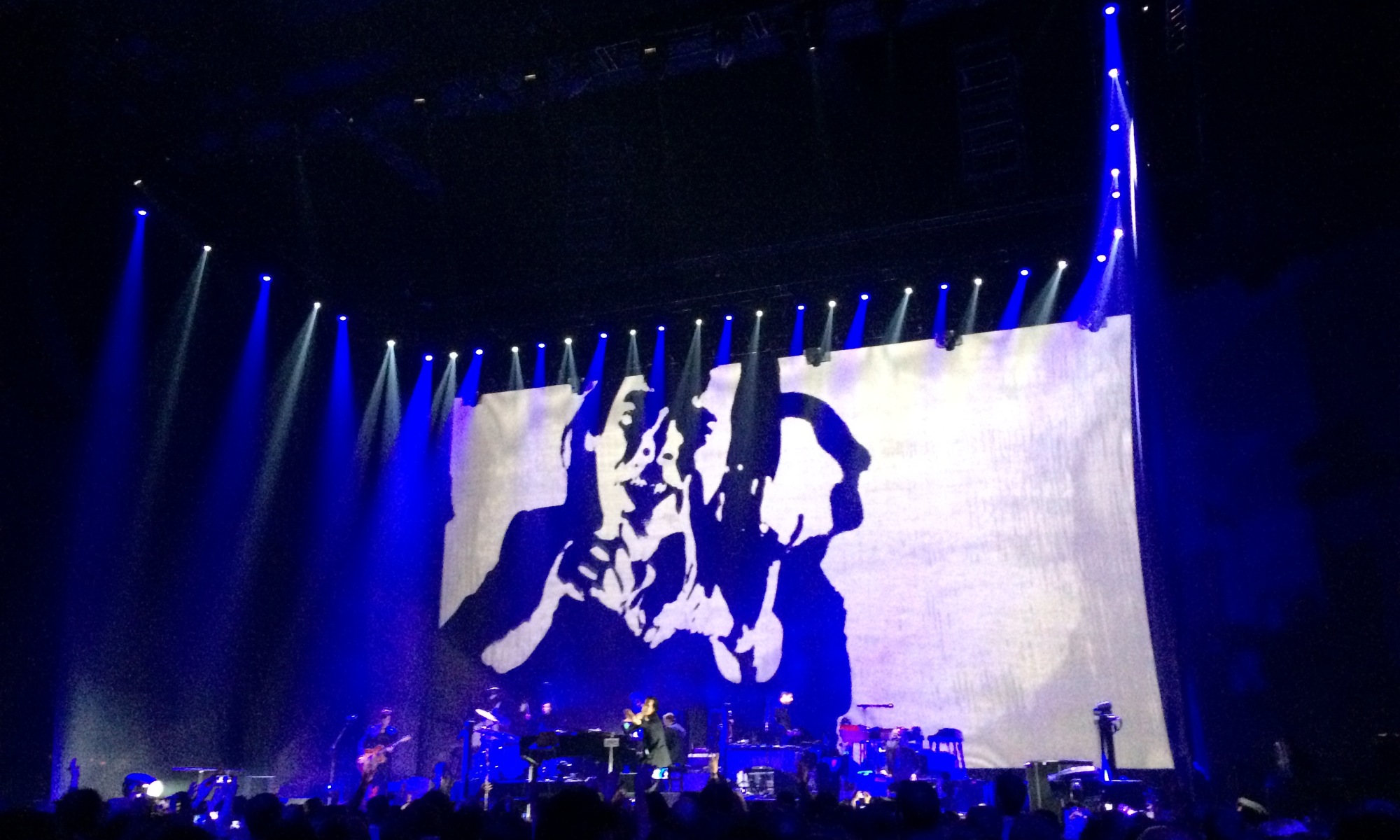 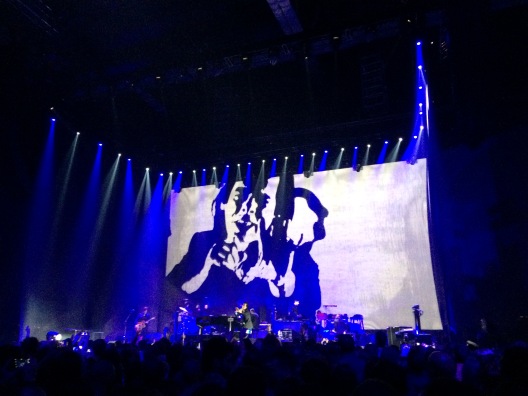 Traditionally, I start off every year with The Music and Myth Awards. Because of the website’s long hiatus in 2017, I decided to welcome this new year of music with some long-overdue articles.

First on the list is a recount of a truly spectacular event. For a while, I hesitated to publish it for fear that it was no longer relevant. I was supposed to post this review right after Nick Cave and the Bad Seeds concluded their UK & Europe tour in November, with their second show at the Menorah Arena in Tel Aviv. Timing aside, however, the celebrated musician’s performance at the Kombank Arena (meanwhile the Stark Arena) in Belgrade was such a uniquely satisfying experience that omitting to publish the story would have forever felt like a missing link in the evolution of The Music and Myth.

The date was October 28th and our trip was almost a year in the making. When my cousin, Oana, suggested the concert and a family road trip to nearby Belgrade, I jumped at the opportunity.  Unlike Oana, I hadn’t stayed in touch with Cave’s work over the last decade, having become increasingly preoccupied with examining the international jazz catalog from A to Zorn. Nevertheless, I couldn’t pass on the prospect of seeing one of the best songwriters this side of Tom Waits before he decided to retire, turn into a raven and fly off somewhere never to be heard from again. Added to that was the fact that my best friend had just purchased tickets to see the Rolling Stones, so I considered this a bit of a challenge to “keep up”. Like the Stones and Waits himself, Nick Cave should be a bucket-list act for any serious music enthusiast, a fact that was emphatically reinforced on that night by the Prince of Darkness and his storied band.

Belgrade proved a deceptively suitable location for one to get reacquainted with Cave’s body of work. A vibrant, confrontational city, Belgrade feels like a European time capsule. Unbound by EU governance, the city seems to exists in a parallel timeline located somewhere in the early nineties, with its campy advertisements on communist-era buildings, taxi scams and nonexistent smoking regulations. It’s a spectacular place that feels urbanely wild and uncompromising but also honest and fearless. When we entered the large arena and found ourselves surrounded by cigarette smoke and booze vendors that sold beer and slivovitz, we knew it was going to be an old-school gig.

The artist’s presence already dominated the environment with the speakers continuously playing the haunting “Three Seasons in Wyoming” for the entire half hour that Cave and co. were late. Coupled with the delay, the eerie, repetitive tune created among the crowd a general feeling of anxiety and even irritation. Towards the half hour mark, there were more than a few calls of, “Let’s go, already!”

Paradoxically, this tension only served to increase the cathartic release of excitement once the band, led by Warren Ellis, took the stage. Having all but forgotten the frustrating anticipation, the Serbian crowd welcomed Cave with a love and enthusiasm that bordered on the fanatical. “George told me this was going to be an awesome crowd,” Cave observed.

The set started with “Anthrocene”, which felt like a strangely lethargic way to open a two-and-a-half-hour mammoth-show, despite the song’s apocalyptic atmosphere and flawless lyrics. Nevertheless, for someone who’d never seen the band live, Cave’s tall, dark frame and almost cartoonish presence was fascinating to witness. I also have to admit that, as an author, merely hearing the word “anthrocene” spoken out loud was awe-inspiring. Even more so was discovering the depth and power of Cave’s voice in a live environment with impeccable sound engineering.

After the somewhat unorthodox beginning, for which he sat on a chair near the piano, the vocalist rose to engage with his audience for the equally hypnotic “Jesus Alone” and “Magneto”. With outstretched arms, Cave dangled precariously over the edge of the stage, at times stroking the hands of his spellbound audience, at times balancing himself with their support.

“You believe in God but you get no special dispensation for this belief now. You’re an old man sitting by a fire. You’re the mist rolling off the sea. You’re a distant memory in the mind of your creator, don’t you see?” he professed with a seer’s confidence, sounding like Lenny Belardo from The Young Pope delivering his homily. This level of familiarity with the crowd continued ceaselessly throughout the show, during which the vocalist took the term ‘audience engagement’ to a level I’ve never seen before. I’ve thought about this for a while since then and came to the conclusion that my unfamiliarity with Cave’s work over the last decade and my unawareness of the tragic events surrounding the creation of The Skeleton Key might have increased the intensity of my reintroduction to his work.

Finally, after the somber beginning, the band departed Skeleton Key territory with “Higgs Boson Blues”, a crowd-pleaser by the sound of the enthusiastic reception. Afterwards, the performance abruptly abandoned its pensive origin, thundering forward with “From Her to Eternity”, the raucous “Tupelo” and “Jubilee Street”, whose frenzied finale made for one of the evening’s most intense moments. As somewhat of a neophyte, I can’t imagine a more poignant introduction to who Nick Cave is as an artist in 2017 than the aforementioned trio of songs, each presenting a different creative side of this multifaceted artist.

“The Ship Song”, one of the band’s most beautiful ballads, provided a welcome change of pace for an emotionally exhausted audience. It laid the foundation for the next part of the show, where the musicians built up towards a final catharsis with “Girl In Amber” and “Into My Arms”, culminating with the heartbreaking “I Need You” – the absolute highlight of the night.

In a recent interview, where he spoke about the tragic death of one of his sons, Cave said, “I want the shows to be uplifting and inspiring and for people to walk away feeling better than when they came, not some sort of empathetic contagion that goes through the crowd and people walk out feeling like shit. I don’t want that. Because I’m not feeling that way. On stage I feel great.”

After the heartfelt moment, Cave dissipates the mournful atmosphere with classics “Red Right Hand” and “The Mercy Seat”. The latter especially was a personal highlight for me. Famously covered by Johnny Cash, the song became one of my favorites in the American Recordings series.  I still prefer Cash’s version, but the experience of hearing the song live was exhilarating and reminded me of the time I’d heard Mark Knopfler performing “Telegraph Road” at the László Papp Arena in Budapest.

The set closed with a touching rendition of “Distant Sky” and “Skeleton Tree” before the band politely bowed and vacated the stage. Of course, the audience was not going to let them off the hook so easily. When they returned for an encore of “The Weeping Song” and “Stagger Lee”, Cave was a changed man, his energy seeming to increase the closer he got to the evening’s finale. For the former, he went out into the audience, balancing above them on a fence as though he were on stilts before inviting some of them on stage with him for the profanity-ridden ode to the bad motherfucker called Stagger Lee.

They closed with “Push The Sky Away” and Cave delivered the tune with all the manic devotion of a delusional faith-healer, an effect unquestionably enhanced by the audience’s reverent gazes. Only after the show was over and we were silently walking back to our Air B’n’B through the empty streets of Novi Beograd did the magnitude of the evening truly hit me. I knew that I would be seeing one of the all-time greats, a man known for his dark and evocative poetry. I was aware that Cave and the band had a reputation for putting on awe-inspiring performances and, as I mentioned, I thought of this as a bucket-list gig. What I didn’t expect, however, was that I was going to experience a group of musicians at the creative height of their careers.